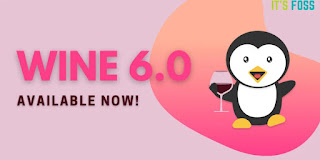 Linux systems are famous for their strong and protected system, as it is free and open-source that opens the way for creators and developers to modify it and add features and advantages to improve their efficiency

Wine Project 6.0 is now available with the latest version to run Windows games and applications on the Linux system
The new version of Wine is more stable, efficient, and supports larger applications than the previous version, which appeared in mid-2020.
This new update was the result of several tremendous efforts by the developers, as it carries more than 8,300 individual changes, which is greater than the previous version.
The wine is not an emulator, but it is concerned with running Windows applications and games on various Linux systems,
unlike VM programs and emulators, where Wine focuses on the background of the Windows Application Protocol (API) and works on translating it into portable copies (POSIX)
In the past, Microsoft opposed the Wine project, but now it has assumed a prominent place in the history of Microsoft
Among the most important features and main features of this release are Vulcan wallpaper, wined3d support, a new design for the text console, And some basic models like pe NTDL, kernel32, gdi32, and user32.
Using and supporting the latest versions of Vulcan Driver guarantees us new improvements and amazing tweaks for Wined3D.
The new version supports direct3d 11 features, with new improvements to the input devices, the USB kernel program, the location of the mouse position during games, and the on and off notifications.
Also for gaming enthusiasts, wine 6.0 comes with the best anti-cheating systems while playing online with better network support.
With updating the Mozilla is gecko layout engine, the project's developers seek to provide the best user experience while they run their favorite applications and games smoothly and efficiently on various Linux systems and Apple devices.
Finding a free and open-source wine project to run Windows applications and games is a wonderful thing, as it obfuscates us from searching for programs and emulators to run them that may harm our devices or they are not smooth and efficiently making the same applications on the Windows system As a user of the Linux system,
would you like to run Windows games and applications on the Linux system without tools or emulators?