February 01, 2021
With the great spread of rumors about the release of iOS 15 that at the present time there is no specific date, and it is expected that Apple will talk about its new releases at WWDC 2021, but surely there will be leaks about it 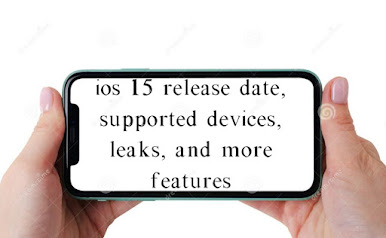 Not forgetting that Apple in its previous release of iOS 14 introduced new features that were of great demand from users, a home screen with smart tools, automatic organization of applications from the application library, changing the default browser and e-mail, and for this, it is expected from the iOS system 15 more advanced improvements
By referring to the rumors and leaks so far about iOS 15, which will appear for the first time in the iPhone 13 variants, this is some information that we provide to you by referring to the source from the tomsguide site

Apple always launches new releases and improvements with the latest version of its iPhone phones, but due to the spread of the covid-19 epidemic, we saw that the launch of the iPhone 12 series phones was delayed until October, and the latest version released so far iOS 14 in September 2020
Therefore, it is believed that iOS 15 will be released in early September this year, as Apple will talk about new updates and improvements this summer at the WWDC Developers Conference, where we will see the beta releases and everything new about iOS 15
IOS 14 from Apple was allowing us to try the beta versions and the initial version of the release, and with the iOS 15 system, Apple is also expected to do the same.

ios 15: what are supported devices?

So far, Apple has not talked about the devices that will support the ios 15 system, but according to the leaks, it will arrive on iPhone 7 and above, meaning that the iPhone 6s and iPhone 6splus, iPhone SE have been abandoned
If the rumors are true, here is a list of iPhone devices that will support iOS 15:
And don't forget that the iPhone 13 will come with iOS 15 as soon as it is launched.

IOS 15: What does the user want

As users of iPhone devices, we expect to add improvements and new features, such as some of the features that we see on some Android devices, and can really benefit from them,
Here is the list of add-ons that the user wants for iOS 15 :

Upgraded Notifications: The notifications problem is a nightmare for iOS users, as most important information is not read, and this is why we want more clear notifications, especially related to e-mail and important daily applications, as well as iOS that neglects to update this feature because Android in each version occurs and improves the effectiveness of its notifications, we would like to see new improvements About notifications and alerts for iOS 15
Better Siri: Regardless of the emotion, Siri is still not up to the level of its services like Google Assistant, we want Apple to develop Siri to a better aspect of speech recognition, accurate answers, web searches more accurate and smooth, and its ability to answer more questions
We hope Apple will support Siri to see new improvements.